Over two hundred years the property surrounding Bovaird House has witnessed many changes from rural farmland to massive urban sprawl, Brampton has grown from a village to a thriving city.

In 1819 John Silverthorn Jr. of Stamford, Niagara and descendent of United Empire Loyalist stock, secured an Upper Canada Land Grant. The grant defined the one hundred acre area as “the west half of Lot number 10, in the second Concession East of the Centre Road, in the Township of Chinguacousy” The grant stipulated that proof of residence [the erecting of a log home or shelter], a roadway cleared of stumps and brush and the fencing of five cleared acres with subsequent crop plantings all to be completed within the initial eighteen months. 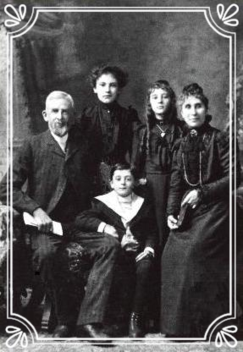 For reasons unknown, in 1821 John Silverthorn Jr sold the property to Scottish born Peter Chisholm. After initially settling in Nova Scotia, Chisholm had moved to New York where he established a prosperous bakery business. However, following the War of 1812 anti-British sentiment was running high in the United States and Chisholm decided that living conditions in Canada were probably more favourable. While it is believed he intention was to settle somewhere in Caledon, his casual meeting with Silverthorn resulted in Chisholm acquiring Silverthorn’s log cabin with it’s one hundred acres for sixteen pounds.

Having to close down his bakery business Chisholm promptly returned to New York leaving his newly acquired property in the care of neighbour, Henry Carter. In 1828, with wife Christine, plus his mother-in-law and a young niece and nephew, Chisholm returned to Chinguacousy and his hundred acres. In order to accommodate the family, Peter Chisholm enlarged the existing log cabin to four rooms that provided a good sized kitchen and parlour plus he also added a loft that provided sleeping quarters for the children.

The family grew and prospered and in 1845 Chisholm began building the house that stands today. Using bricks made on the site, the Georgian style farmhouse was completed in 1852. An 1987 architect’s study determined that the house was built in two stages, with the present day large farm kitchen with its hired help quarters above, added possibly ten years later. Peter Chisholm’s large bake oven was originally free-standing adjacent to the house but was incorporated into the kitchen addition.

In 1929 Amelia, Florence and Peter Renwick sold the property to James Bovaird for $8,250. James with wife Fanny and their eleven children, however did not move into the house, instead moving into a converted schoolhouse close to the present day Bovaird Drive and Hwy 10. While the farmhouse was rented James, being a keen horse breeder, used the actual Bovaird farm property to raise world-class thoroughbreds.

Following the death of James in 1938, William, the second youngest of the eleven children, inherited the house. In 1941 William took up residency becoming the first [and only] Bovaird to ever live in the house. Following their marriage in 1945 Mossie, a local school teacher, joined him. While William continued breeding thoroughbreds, driving and police horses he also served terms as Reeve of the Township of Chinguacousy, Superintendent of Roads and City Councillor.

James and Fannie Bovaird – Both born 1861 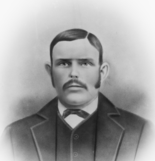 The Bovairds lived in the house for over forty years during which time the surrounding area had undergone extensive residential and commercial development. Seeing the changes William and Mossie were determined to preserve the heritage house in order that future generations could enjoy a historic landmark from a bygone era. The couple entered into a ‘surviving member pact’ whereby the entire property would eventually be donated to the City of Brampton.

Following William’s death in 1983, Mossie fulfilled the couples promise to donate the house and property to the citizens of Brampton. At this time the property, now valued in the millions of dollars, represented an extremely generous donation to the City. The donation became official in 1985 with Mossie passing away nine years later in 1994. 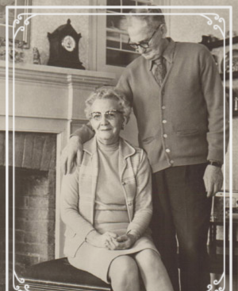 In 1992 the ‘Friends of Historic Bovaird House’ volunteer group was formed. Starting with a completely empty farmhouse, the volunteers worked tirelessly raising funds to enable the loving restoration and furnishing of the house to the 1850 – 1900 time period. The museum was created by the volunteers with donated artifacts and period furnishings purchased with funds generated entirely by special events. Both Historic Bovaird House and the Pendergast Log House provide a glimpse into a bygone era. We think William and Mossie would be very proud.

Join the Friends of Bovaird!

Join the Friends of Bovaird!